Skip to content
HomeBATTLE OF THE SEXES: MALE OR FEMALE GOD?

THE BATTLE FOR GOD: MALE VS FEMALE

Some years ago, a very good female friend of mine tried to convince me that the creation story, as we know it, was fabricated. She claimed that in the beginning God had actually created woman before man but because man was expected to be proud, arrogant, controlling and maybe narcissistic, it was thought prudent to tell him that he was created first. My friend also noted that God told Eve that this idea that male was created before female was to be a secret between God and Eve, woman to woman.

Stop a minute. Hold it right there! Let’s absorb this thought. In the beginning, not only was woman created before man but God was also a woman. A feminine god?  Now, every good Christian knows that it is heretical, blasphemous, insane, presumptuous, and unpardonable to imagine God with any other gender but male.  Fortunately, this is the 21st century so instead of burning my friend at the stakes, we simple write off  her views as being feminist and poppycock. In defence, she was however quick to point out that the same merit for a masculine god is just as poppycock as the idea of a feminine god.

Hmmmm. Thinking. Thinking. Not thinking. Hold the horses. The idea of a gender for God apart from masculine was very difficult for me as I grew up as a Baptist. Indeed, as a child I could recite the 23rd Psalm, “The Lord is my shepherd, I shall not want. He leadeth me…” as well as the Lord’s prayer as stated by Jesus Christ in Matthew 6 vs 9: “Our Father who art in heaven, hallowed be thy name……”

Now, every good Baptist “knows” that Jesus spoke with “authority” and on behalf of “God” so if Jesus say God is father, then God is father. Argument done. Male sexism has won.

Suffice to say, it is a beautiful comforting idea having a father-god who is both caring and nurturing while being protective and strong. Maybe if you take away this belief of a father- god from me, I might become distraught. Yeah, change can make the comforted become uncomfortable and the uncomfortable become comforted. It is a real dilemma: childlike simplicity vs adult complexity.

Seriously now,  does it matter if the creator is male or female? Do we have to get God involved in the battle of the sexes. The simple answer is a profound yes, it matters profoundly: a male god will create a male world and a male world is a dangerous world for both males and females. Testosterone is a mighty thing.

Most likely if you are a woman you might have suffered immensely from this seemingly inequity, sexist and chauvinistic approach to running society, countries, villages and families where the male gets preference.

For example, despite the fact that a woman spends nine months nurturing the fetus until birth, the child upon birth, whether it be a male or female, is given the father’s surname. This is “naturally” so even if the father is a bum. Similarly, birthright and even royalty are passed on with first choice to the male even if he is the last born in the family of otherwise all girls. In some cases, women cannot become heads of church, state, organizations or even the home, even if the male is a bum.

These are real and troubling thoughts but most people, including I, would normally avoid them, pointing them out as revolutionary in nature or simply as idle and careless. Similarly, we would write off as fantasy or nonsensical to imagine what it would be like if god was not masculine. Poppycock? Definitely not. Dreams? Maybe. After All, some religions already view the creator of the earth as being feminine and have goddesses such as Isis, Ishtar, Venus etc.

THE BEGINNING OF A MALE GOD

Even before the Old Testament times, virtually every culture in the entire world was patriarchal in structure. The real justification for this tendency and status of history depends on the religion and the political constructs. In our Judaeo -Christian environment, the justification is found in the Genesis story, especially Genesis 1 vs 26 – 27.

“And God said, let us make man in our image, after our likeness: and let them have dominion over the fish of the sea, and over the fowl of the air, and over the cattle, and over all the earth, and over every creeping thing that creepeth upon the earth. So god created man in his own image, in the image of God created he him; male and female created he them”.

Let us naively look at this part of the creation story. First thing we noticed is that God doesn’t seem to be alone when he was making man. “Let US make man in OUR image and likeness”. This begs the questions: who are us and ours? Are they plural, discrete and separate in nature? Do they represent male and or female gender? (This is a blong in itself) cond thing of note is “So God created man in his own image, in the image of God created he him; male and female created he them”. Of interest here is that, for the first time, God is now HIS and HE, which is a masculine and singular entity. Why is this assumption? (This is a blong in itself but see below)..

The next thing to note is that man was made in God’s image and likeness. Does this mean physical features (hands, head, eyes, mouth and brain) or is it image in terms of intellectual creative traits?

Maybe a more noble and fitting idea of God’s image would be man’s ability to think, create and make moral decisions. This high level of intelligence is what separates man from other creatures. Intellect vs intuition.

The final thing to note in that verse is that “in the image of God created he him; male and female created he them”. This could be construed that male and female are made in God’s image (intellectual) and that man or mankind refers to both man and woman rather than as simply a male human.

THE REAL GENDER OF GOD

Common sense, although uncommon, suggests that before creation, the Creator did exist but time, space and matter did not exist.  It follows that the Creator is spiritual in nature and does not need or possess any form of physical human characteristic to exist. Indeed, try and imagine a god that has feet, hands and a mouth to feed trying to live in nothing:  an earth without form, and void.

Job 33:4 “The Holy Spirit is God the creator” is blaring and it is strongly supported by John 4:24, “God is spirit, and his worshipers must worship in spirit and in truth.” Of course, it is hard to worship a spirit or creator one cannot
see and many religions have created physical gods and or use  figurative language to assign human characteristics to God.

This Anthropomorphism, simply putting human characteristic to a non-human element, can be accommodating as it allows us to personalize our relationship with an inanimate  or invisible thing. It can however result in a level of enslavement and dogma if the figurative idea is repeatedly taught and justified as literal and is used to control mankind activities. After-all, even lies if told repeatedly become “truth”.

Controversial philosophers such as Engel and Marx even believed that “In the beginning man created god in his own image and likeness”. They believed that man created god as a male and used the precept to develop a patriarchal society which put males as superior over females, family, private property and the state. This male dominated status quo is today’s product of a dangerous world littered with war, poverty and injustice.

Of course there is no guarantee that the notion of a feminine-god would provide a peaceful and poverty free world. Women can be very temperamental with dispositions that at times make men look like saints. The popular saying “There is no fury in hell like that of a woman scorned” was coined because of this awareness.

Albert Einstein sums up the god and gender issue neatly in the following excerpts from his writings circa 1941:

“During the youthful period of mankind’s spiritual evolution human fantasy created gods in man’s own image, who, by the operations of their will were supposed to determine, or at any rate to influence, the phenomenal world. Man sought to alter the disposition of these gods in his own favour by means of magic and prayer. The idea of God in the religion 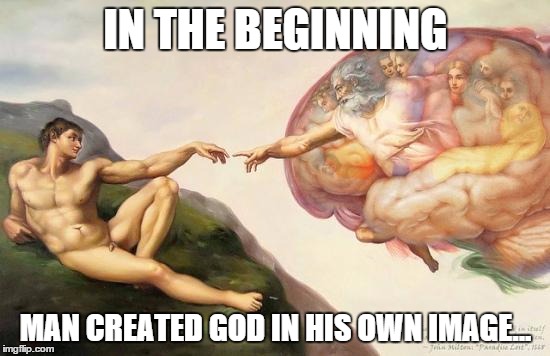 s taught at present is a sublimation of that old concept of the gods. Its anthropomorphic character is shown, for instance, by the fact that men appeal to the Divine Being in prayers and plead for the fulfillment of their wishes.
Nobody, certainly, will deny that the idea of the existence of an omnipotent, just, and omni beneficent personal God is able to accord man solace, help, and guidance; also, by virtue of its simplicity it is accessible to the most undeveloped mind. But, on the other hand, there are decisive weaknesses attached to this idea in itself, which have been painfully felt since the beginning of history”.

Einstein continued, “God is a mystery. But a comprehensible mystery. I have nothing but awe when I observe the laws of nature. There are not laws without a lawgiver, but how does this lawgiver look? Certainly not like a man magnified.” He added with a smile, “some centuries ago I would have been burned or hanged. Nonetheless, I would have been in good company.”

Chances are I would be in Einstein’s company although today they don’t burn you at the stakes or hang you at the gallows, they simply call you crazy.  Nonetheless, crazy or not, an omnipotent, omnipresent and omniscience creator would not need a physical form much less gender and testosterone to exist. Indeed, a   male god concept and patriarchal society have resulted in the creation of a dangerous world filled with wars, poverty   and the exploitation of women and other less fortunate creatures.  On the other hand, a female god may not do much better as estrogen would affect her behaviour.

Maybe we should not “get into God’s business” by including it in the battle of the sexes but the reality is that if we accept the notion of a male god, not only are we in God’s business but we are putting God on the side of males. Indeed, the battle of the sexes  for God is one war if won by either side will be fatal to society. We could play it safe and provide for our childlike craving for a fatherly figure and yearning for a motherly figure by having a god with both genders. However, throwing safety to the winds and for the fun of it, we could envision a gender-less god where the battle of sexes doesn’t arise and happiness lies in bringing out the “Good, the True, and the Beautiful in humanity itself”, in spite of and despite your gender.

3 thoughts on “BATTLE OF THE SEXES: MALE OR FEMALE GOD?”