Skip to content
HomeWHY BLACKS MARRY WHITE AND WHO CARES?

For her Winter Solstice gift, December 22, 2016, Serena Williams,  the 22-time grand-slam winner announced on Reddit her intentions to wed Alexis Ohanian, the 33-year-old co-founder and executive chairman of Reddit, who is a White man.

Of course the internet began buzzing and tweeting with positive and negative sentiments. Some folks even argued whether Serena can continue representing real Black women while marrying a White man.  Serena qualified all responses by noting that “when she dates someone she never sees color as she dates who she has chemistry with”. She also noted that Alexis has treated her better than any Black man she had dated and we know Serena has dated a slew of Black men including rappers Drake and Common as well as former NFL linebacker Lamar Arrington and basketball star Amare Stoudemire. Who feels it knows it. Then again, who cares?

Without defending Serena’s interracial preference, we must be cognizant of the fact that more Black men marry White women than do Black women marry White men.  Truth to be told, there are great catches, oops, great prospects, in every race on earth. In Jamaica we say, ” every hoe has its stick a bush”, meaning that everything has its fit.

It does seem as if Love, beauty, care, protection and compassion are not skin or race restricted. Neither are bigotry, delinquency, ugliness and poor parent hood restricted to race, class or creed. Indeed, the only person incapable of love is either dead or severely mentally disturbed.

HOW MANY BLACKS MARRY WHITE

It does seem as if most successful Black men are being stereo typed as prone to marrying White women based on the conspicuous behaviour of plenty rap stars, athletes and musicians choosing to date or marry interracially when they achieve fame. Fact is that the same is not true for the bulk of successful Black men. By analyzing census data, Toldson and Marks found that 83 percent of married black men who earned at least $100,000 annually got hitched to Black women. The same is the case for educated Black men of all incomes. Eighty-five percent of Black male college graduates married Black women. Generally, 88 percent of married Black men (no matter their income or educational background) have Black wives.

On a sexual note, https://www.18karatreggae.com/2016/01/29/6736/, a study from Rutgers University in New Rochelle, NJ, has concluded that approximately 87 percent of American White women have had or fantasize about having sexual relations with African American males.  Interestingly enough, the same study says only 13% of white women said they would would marry and raise a family with a Black man.

Why are more people having favourable attitudes towards interracial marriage even if they would not do it  themselves? The major contributing factors would include legality, morality  and shift in attitude due to  change in values and the millennial kids now maturing.

The simply reason why more Blacks date and marry Whites is because it is now legal. Indeed, we are indebted to Richard and Mildred Loving, an interracial couple who were thrown in jail in Virginia for violating the state’s rules against multicultural marriages fifty years ago. In 1967, the U.S. Supreme Court ruled miscegenation laws—or laws preventing people of different races and ethnicities from getting married—unconstitutional. (By the way Loving is their real surname..lol). Please read this better than Mills & Boon real life love story at https://en.wikipedia.org/wiki/Loving_v._Virginia.

Now, Decades later, naturally, interracial marriage is now the highest it has ever been in the United States, up 14 percent compared with what it was in 1967 when the courts ruled in favor of Richard and Mildred Loving.

Genesis 2 vs 24 suggests a “man shall leave his father and his mother, and be joined to his wife; and they shall become one flesh” but  (Deuteronomy 7:3–4) did not encourage the inter marriage of the Israelite with other peoples.  However, the reason for this command was not due to skin color but rather religious. It seemed God felt that people of other races were worshippers of false gods and the Israelite would be led astray from God if they intermarried with idol worshippers. Self preservation?

More intense, Hitler and his followers will let you know that race should not mixed as some races are inferior and will water down the real “master” race. (The verdict is still out. Science has not shown racial supremacy and The Old Testament writers can’t be subpoenaed).

Americans’ attitudes about interracial marriage have changed dramatically over the past 55 years, moving from the point in the late 1950s when disapproval was well over 90%, to the point today when approval is approaching 90%.

Approval of black-white marriage is higher among younger Americans especially the millennial kids (18 – 34), and lowest among those 65 and older.  Yes, the millennial generation has grown up and now they are parents. Their attitudes, behaviors and perceptions are different from that of their conservative elderly parents and fore parents. Colour and race taboo have been significantly downplayed by them and even replace d by diversity, liberalism and alternative lifestyles.

However, Census data indicated that black-white marriages in reality remain fairly rare — although they have increased from 167,000 in 1980 to 558,000 in 2010, they still represented less than 1% of all married couples.

Stevie Wonder and Paul McCartney seem to believe that it takes ebony and ivory to make music on a piano. Well, music played on a piano uses two colour keys: black and white. The white keys are more than the black keys yet music require both colours. Although a poor analogy, it is possible for some people to make music and possible find love doing inter racial.

THE CONTRIVED SUPERIORITY OF BLACKS VS WHITES

Fortunately or unfortunately, even the blind can see that since the arrival of Christopher Columbus in 1492 in the Caribbean and the Pilgrims on the Mayflower  in 1620 in the USA, Whites are “superior” to Blacks in status quo and power. The church, the school and the civic organizations all reinforced this false notion in an attempt to prolong the evils of slavery. In primary school we were subtly taught ” “If you are white, it is all right and if you are brown you may stick around but if you are black you better get to the back”. Peter Tosh defiantly added  “or get on the attack”.

Needless to say, apart from melanin and its accompanying nuances, Whites are the same as Blacks. They all have two eyes, ears, hands and feet. They both go to the bathroom, have sex, get kids, and are treated unfairly by narcissistic and chauvinistic males and females. Beauty abounds in all races and for proof, the World Beauty Pageant winners have not been restricted to Black and White women.

Folks usually joke that the USA is such a land of opportunity that it can afford even a poor Black boy to grow up to be a rich White woman. Rudely, Micheal Jackson was used as the ideal example of this. However, many Black women in the USA and the Caribbean have also fallen victims to this “plastic” version of success and beauty. Indeed, Black women are spending millions of dollars each year to look WHITE and “enhance their beauty”. Many have processed their hair to get it straight as if they are ashamed of their so called kinky hair. Some have gone further by bleaching their skins to look white as well.

Understandably, we can be sympathetic with these black brothers and sisters who strive to be “white” and denied their charcoal skin. After all, as mentioned, for centuries Blacks have suffered the indignity of physical rape, robbing, kidnapping and killing mainly by the hands of Europeans under Slavery. They have been stripped not only of their garbs but also of their soul and mind and identity. Despite Emancipation in 1838 in the Caribbean and 1864 in the USA, the black psyche has been warped so badly that many Blacks have found it easier to look and behave like their former white slave owners than to struggle to be free mentally. There is little comfort in reminding them that the ancient Greeks also had slaves who were not Negroes but white men who had been taken captive in war.

A friend of mine sarcastically call these type of Blacks, “Oreo cookies” or “roasted breadfruit”: Dark skin on the outside but white beneath. His claim is that if a Black brother wants a Black sister, he has little choice as the sisters look like White women. He jokingly asked, “What does it benefit the black brother to choose a “black” white woman over a white woman. Is it better to have a real woman who is white than a confused woman who is black?” Quite a dilemma.

However, thanks to Marcus Garvey (1887 – 1940), his rally call for Black consciousness has not fallen on deaf ears and there are a few brothers and sisters have developed a sense of black pride that is creating a glimmer of hope. 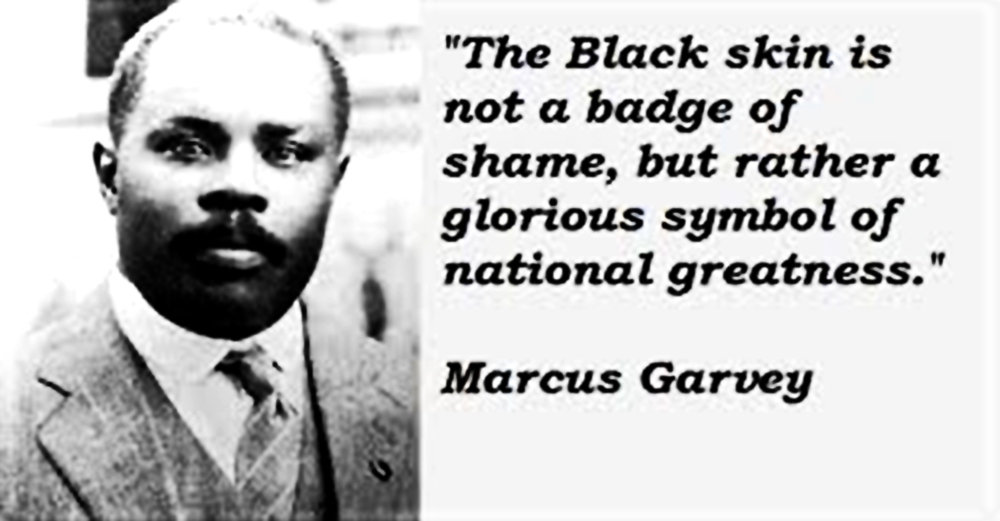 An excerpt from Albert Einstein’s Essay on Racial Bias supports Marcus Garvey’s cry for Blacks to “emancipate ourselves from mental slavery as none but ourselves can free our minds” in his 1946 essay on racial bias against the Blacks in USA.  https://onbeing.org/blog/albert-einsteins-essay-on-racial-bias-in-1946/

“A large part of our attitude toward things is conditioned by opinions and emotions which we unconsciously absorb as children from our environment. In other words, it is tradition — besides inherited aptitudes and qualities — which makes us what we are. We but rarely reflect how relatively small as compared with the powerful influence of tradition is the influence of our conscious thought upon our conduct and convictions.
“It would be foolish to despise tradition. But with our growing self-consciousness and increasing intelligence we must begin to control tradition and assume a critical attitude toward it, if human relations are ever to change for the better. We must try to recognize what in our accepted tradition is damaging to our fate and dignity — and shape our lives accordingly.
“I believe that whoever tries to think things through honestly will soon recognize how unworthy and even fatal is the traditional bias against Negroes.
“What, however, can the man of good will do to combat this deeply rooted prejudice? He must have the courage to set an example by word and deed, and must watch lest his children become influenced by this racial bias”.

I am still not sure if inter racial marriage is cool especially for the children of the union who find themselves mid stream, neither black nor white.  Yet, today’s society is wreaking such havoc on the institution of marriage that if a man or woman chooses to marry he or she should be commended because the current level of liberalism, alternative lifestyles and patterns of broken marriages can easily deter people from marrying.

The choice of to whom to marry should be each person’s prerogative since value and love lie in the eyes of the beholder. At the end of the day what is important is the extent to which the brotherhood of man can be pursued and attained. Of course, malicious self interest is misguided and Haile Selassie, Emperor of Ethiopia, begged us to ditch racism, class, and bigotry and get hitched with understanding, tolerance and  goodwill, In short, philanthropy vs misanthropy. Bob Marley put Selassie’s words of wisdom to music and came up with the thought provoking reggae hit, “War”. Then again, who cares.

Clifton Neil is a university lecturer in marketing and a lover of history and literature. Contact – cneil@wordfoodmusic.com. Twitter. @cliftongneil

One thought on “WHY BLACKS MARRY WHITE AND WHO CARES?”